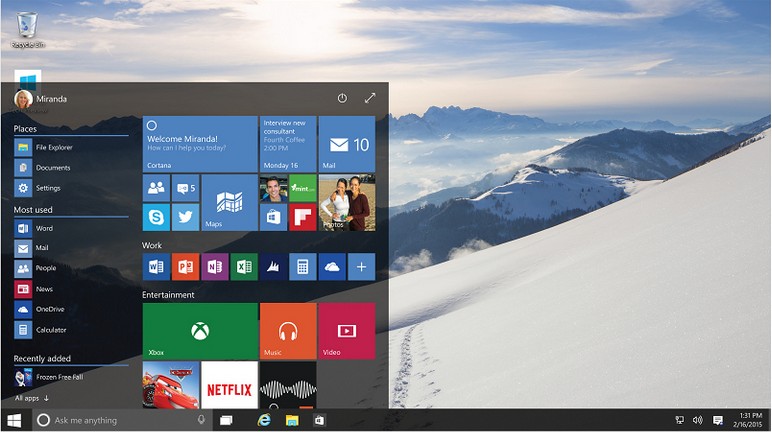 THE latest version of Microsoft’s Windows operating system has landed, and includes many features and changes that will make your computer faster and easier to use. Windows 10 builds on the performance improvements of its predecessor, Windows 8, and improves usability with many features first developed for Linux.

Top of the list of changes is the new Start menu. The full screen of tiles is gone (though can be restored if you liked that design) and in its place is a much more accessible and traditional menu.

Another handy new feature to Windows is the search tool. It may not sound new, but its application is – placed next to the Start button on the taskbar, the menu rapidly searches your apps, files and the internet to find what you are looking for.

Fast and stable, Edge shows Microsoft is serious about improving the user experience in Windows 10.

Other new features in Windows 10 include the Action Centre, which collects system and app messages for you to check later, more advanced login and security features and Task View – a different way of organising your open apps.

It’s not all smooth sailing though. People upgrading to Windows 10 may experience issues with their video card drivers and touchpads. The issues can in most cases be fixed, but some fiddling with system settings and update settings is required.

Also of concern to many users a feature which turns your computer into part of Microsoft’s distribution network. After you install 10, your computer will start sharing setup files with other computers all over the internet, taking a load off Microsoft servers but blowing many people’s internet data caps. Thankfully this can be disabled, but action is required.

Performance improvements of up to 30 per cent can also be found through system tweaking.

Windows 10 is still being rolled out for free to some Windows 7 and 8.1 users, but anyone can upgrade. If you would like to learn more about Windows 10, discuss your needs and see if the new operating system is for you, drop into ITaffinity.

If you need help updating, ITaffinity can also install Windows 10 and tweak it for a lower price than you might think!